FRESNO, California. February 9, 2012 – Local exterminators better be on alert; a giant lizard seems to have invaded our fair city and is causing quite a commotion in the vicinity of Chukchansi Park, home of the Fresno Grizzlies Baseball Club. But as it turns out, there is no cause for alarm – the “giant lizard” is actually an enormous 3D image, 10 x 20 feet to be precise, promoting the upcoming New Line Cinema and Warner Bros. action adventure film, “Journey 2: The Mysterious Island,” opening this Friday.

The eerily realistic image, placed there as part of the marketing campaign for the film, has been causing quite a stir since its unveiling earlier today. The giant reptile appears to be emerging from underground amidst its own eggs, seemingly ready to pounce at any moment on nearby unsuspecting pedestrians. As one of six locations selected for the decal placement to promote the upcoming release, some locals don’t seem to be too concerned that the image may frighten away the public. On the contrary, the general consensus seems to be that, if something can generate this much excitement around town, even if it is a giant lizard – it can only be a good thing. 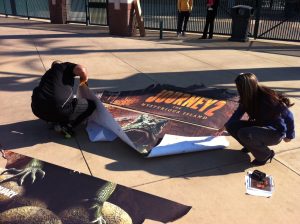 The follow-up to the hit 2008 film, “Journey to the Center of the Earth,” the new film takes young Sean Anderson to a mysterious island where no island should exist: a place of strange life forms, mountains of gold, deadly volcanoes and more than one astonishing secret. Unable to stop him from going, Sean’s new stepfather joins the quest. Together with a helicopter pilot and his beautiful, strong-willed daughter they set out to find the island, rescue its lone inhabitant and escape before seismic shockwaves force the island under the sea and bury its treasures forever.

Chukchansi Park is a city-owned baseball stadium located at 1800 Tulare Street in downtown Fresno. It is home to the Pacific Coast League’s Fresno Grizzlies Baseball Club.

Find awesome listings near you!